In 2009 it was reported that all South Africa’s ideal org buildings had been purchased.

Except of course Joburg North which was added later. “Oh Ja, we still have to get a building for Joburg North”. This building is yet to be purchased.

Durban’s building was purchased in November 2007. You can read the News24  article on the purchase. The story of this building is rather interesting and I’m sure the back story is not broadly known.

During this period of time Sea Org management were searching for ideal org buildings around the country. In Durban there was a building that Woolworths had been looking to purchase for around R5 million. They ultimately turned it down due to predicted parking problems. This building came to the attention of the church and they had to have it. However it had just been bought by someone else on auction for around R6 million. Despite being advised that there would be serious parking problems with the building the church insisted it would be perfect as an ideal org.

They approached the new owners who made themselves the deal of a lifetime: The church purchased the building for R16 million!

Of course all the money was not in place and money was required urgently so around this time the decision was made that all money raised for ideal orgs, no matter where or for which org, would go into one pool of “ideal org money”. This made it possible to use money raised for Joburg to be used by Durban. That’s exactly what happened. In Joburg R3 million had been raised for a new Test Centre. Joburg had announced this as a “done!”. That money was appropriated to help buy the Durban building. Without missing a beat Joburg was soon having additional fundraisers for the Test Centre, never explaining how this “done” was now “undone” other than to say building costs had gone up and that new work was needed to make it “ideal”.

Once the building had been purchased, full plans were designed and created by Architects Gensler – a company based in Atlanta Georgia USA.   Later these Architects were fired and the project was handed to a South African company – Bentel.

Consultants for the various disciplines were then appointed for the project and they were paid to mark up the drawings for the various services such as Structural and Electrical Engineers, Air Conditioning, Electrical, Plumbing, IT and Quantity Surveying – amongst others.

All of the above mentioned consultants were paid for their work on the Durban project and in effect “Phase 1” of the project was considered complete. To give an idea of what this would have cost, each discipline charges a percentage of the total value of the project as their consulting fee. It is estimated that an additional R2 million Rand was paid to all the consultants. The plans were then submitted to the Landlords office, and the next thing was in September 2010 application was made to demolish the building.

When this was queried, the reasons given to the Consultants was that the renovations would cost more than building a new building from ground-up. , and also due to the age of the existing building there was a problem with the Fire rational Design (i.e. the fire escapes etc were not adequate for what they wanted to do to the building).

So in effect, Scientology in South Africa owns the most expensive parking lot in the country and possibly the world at a grand value of R18 Million Rand

The building before it was demolished

6 years after the purchase of the building all the field and management have to show for it is an empty lot for which Scientologists around the country (and the world) overpaid to the tune of R10 million.

Meanwhile the poor staff and public of Durban are having desperate themed fund raisers to make the money necessary to build this building. Here’s a photo from their last fun filled event. Counting the photographer a grand total of 10 people gathered to reg money from each other. 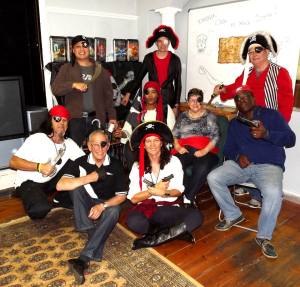 If any of our readers have information about Scientology activities anywhere in South Africa we’d love to hear from you! Email us at scnafrica@hushmail.com